The use of cannabis for animal species is an area of growing interest, largely due to the therapeutic benefits being observed for humans and animals in the era of cannabis legalization. The close relationship that humans have with their pets and other veterinary species has led to a renewed interest in the possibility and promise of cannabis to treat similar issues that humans are using it for.

1.The endocannabionoid system in animals

The endocannabinoid system (ECS) is incredibly old, having evolved over 500 million years ago. The ECS has been identified in nearly all animals, from complex mammals like primates to phylogenetically primitive animals such as jellyfish (cnidarians). The near universal presence and early emergence of the ECS, evolutionarily, is a strong indicator of its biological importance.

The ECS is an extensive group of endogenous cannabinoid receptors found in most animals, including vertebrates (mammals, birds, reptiles, and fish) and invertebrates (sea urchins, leeches, mussels, nematodes, and others). The most primitive animal an ECS has been observed in is the Hydra (H. vulgaris), a cnidarian in the class Hydrozoa, which is the first animal to develop a neural network.

The ECS is responsible for homeostasis, the state of steady internal, physical, and chemical conditions maintained by living systems for optimal functioning. The ECS in animals regulates the same homeostatic processes seen in humans, with more physiological and genetic effects being discovered every year. Due to the nearly universal distribution of the endocannabinoid system in all chordates (animals with a dorsal nerve cord), and in many invertebrates, the same or similar benefits of cannabinoids found in humans also can be applied to most veterinary species. Just like our human counterparts, at present, veterinary practitioners have no or only a cursory understanding of the ECS and cannabis therapies for animals.

One of the most common reasons people look into cannabis for pets is to treat pain, whether it’s caused by an on-going condition like arthritis or a temporary condition like an injury. Cannabis products at the right dose, can kill pain and reduce inflammation not causing kidney issues, as many other painkillers do. For some pets, it can present a safer and more tolerable pain management option than traditional pharmaceutical pet medications.

Arthritis is a condition that causes chronic inflammation and pain in the joints. It is caused by the degeneration of cartilage, which causes the bones in the affected joint to rub against each other.

Feline arthritis will affect a cat’s ability to run, jump, or even walk. Many people, even vets, think that feline arthritis isn’t very common. However, studies have shown that up to 60% of cats over the age of 6 have arthritis in at least 1 joint. The same research also showed that cats over 14 years old have an 80% chance of dealing with arthritis.

Dog osteoarthritis or dog joint pain can be an extreme annoyance to the point of dogs not wanting to move at all due to the issue. Just like humans with arthritis, dogs can suffer from their joints aching all the time. Cannabis products are a great option for any dog with joint pain and arthritis. A study from Cornell University concluded that regular doses of “cannabis products increase comfort and activity in the home environment for dogs with osteoarthritis. Additionally, veterinary assessments of pain were also favourable.” More than 80 per cent of dogs showed an increase in mobility and physical comfort.

Another condition that often causes pet owners to turn to medical marijuana and hemp-derived products is anxiety. Some pets get separation anxiety when their owners go away, while others may generally feel anxious due to personality, age, or illness. Traditional anxiety medications can make pets feel sluggish and sleepy. Meanwhile, cannabis has been deemed effective at treating anxiety with none of the extreme sedation caused by many other medications.

Over the years, cannabis has become well-known as a natural anti-nausea treatment – particularly for patients who are undergoing chemotherapy. It also works well for animals who have lost interest in food or who are experiencing digestive problems. In addition to calming nausea, it also stimulates appetite, which is a double benefit to cats that have lost weight due to a continued bout of vomiting.

Cannabidiol (CBD) has proven to be a wonderful epilepsy treatment in humans. One pharmaceutical company even licensed a CBD-based drug to be used for people with rare and severe forms of epilepsy. This degree of success led researchers to wonder if this type of treatment could also work in pets.

While much of the evidence may be anecdotal at this point (many pet owners say they’ve had success using CBD to reduce seizures in their epileptic pets), there is an on-going study to determine it’s effectiveness. In 2017, a study into CBD treatment for dogs with drug-resistant epilepsy showed promising results that expand treatment options for dogs suffering from debilitating seizures. 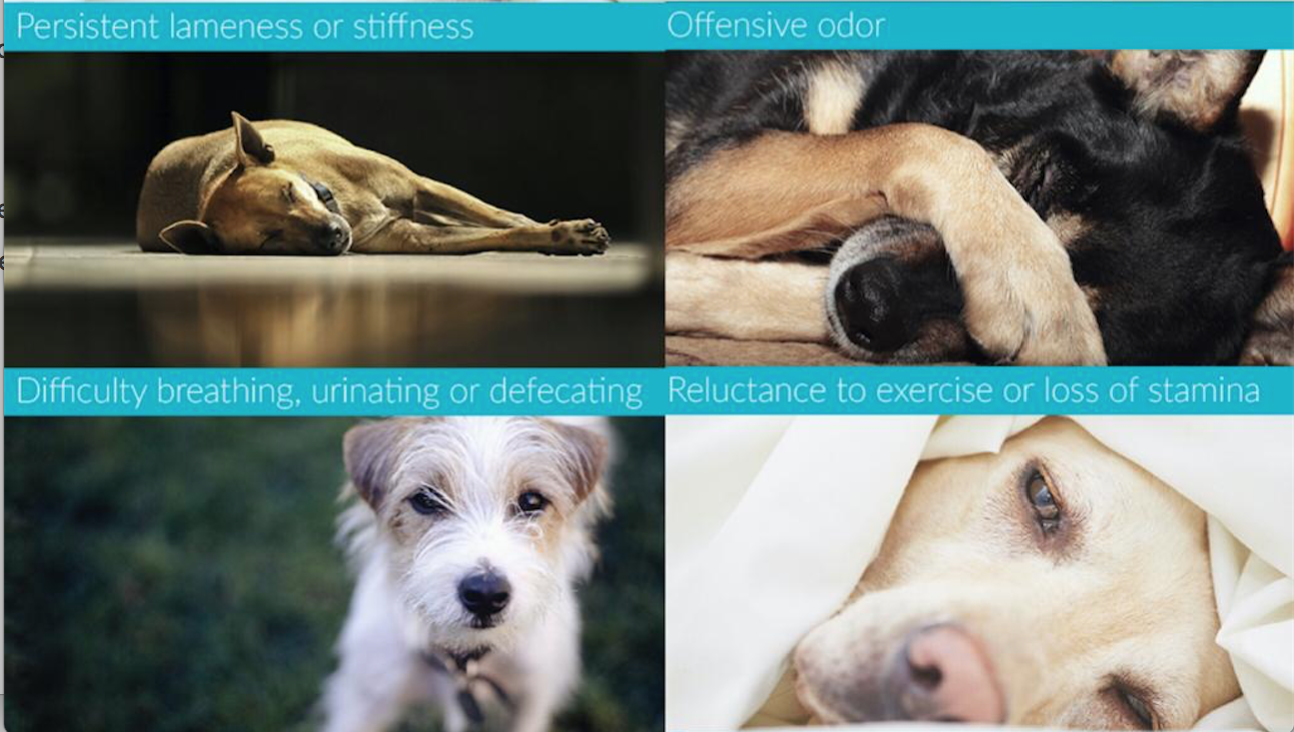 Cannabis can be useful both in the treatment of cancer, and for the many symptoms that accompany conventional cancer treatments. It has been shown to kill certain cancer cells and stop the growth of blood vessels to tumours. CBD may also have antioxidant properties and can help slow down tumour progression. In addition, new studies suggest that CBD may help chemotherapy work more efficiently in animals with cancer.

The CBD component is not the only part of the cannabis plant that may be useful for fighting cancer. Hemp extract is also rich in other natural compounds, such as terpenes and flavonoids.  Limonene, a terpene found in hemp, has been shown to have anti-cancer properties. Flavonoids, such as luteolin and kaempferol, are found in hemp and have been shown to cause disruption to cancer cells. When selecting a CBD product for your dog or cat, look for a full spectrum or broad spectrum hemp extract, since these extract contain these other natural compounds.

Before using CBD with your animal, whether or not he has cancer, discuss it with your veterinarian, and be sure to do some independent research online and find a high-quality hemp-derived product formulated for dogs and cats. Using the right product in the right way (see section on administration), can help treat cancer in companion animals, while alleviating symptoms and treatment side effects.

Some wild animals might be a nuisance to outdoor cannabis growers: for instance, deer, when they are left with nothing else, they will leave no plants untouched. Rabbits and raccoons have been spotted nibbling on cannabis plants when food options are limited. Rats and mice will use the plants for gnawing purposes. Burrowing mammals like gophers and moles have been known to eat cannabis roots, while rodents and birds will eat the seeds.

Among captive wild animals, it has been observed that a snake with a cancerous tumour achieved an 80% reduction in the tumour after 7 weeks of treatment with CBD oil. Another anecdotal report comes from a zoo who has seen a 95% reduction in the seizures of a goat treated with CBD oil. Also, a tiger with cancer is using CBD oil to alleviate pain and discomfort, as well as stimulate appetite. 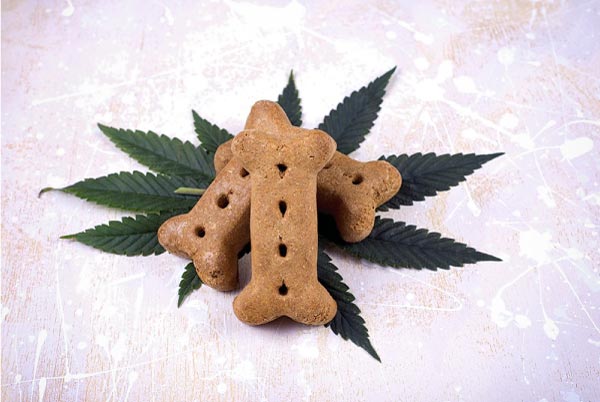 The route of administration is a primary contributing factor in the effectiveness of any medicine, natural or otherwise. Choosing the appropriate delivery method for the patient can greatly affect medical outcomes. In pharmacology, bioavailability is the fraction (%) of an administered drug that reaches the systemic circulation depending on the route of administration. The associated bioavailability of the drug should be balanced with the practical needs of the patient.

There are several formats of cannabis products for companion animals, currently in the marketplace, and several up-and-coming formats currently undergoing research and development efforts by forward-thinking companies.

9. Is cannabis dangerous for my pet?

Any sort of cannabis consumption requires a certain level of education and responsibility, and this also applies to cannabis and pets. Experts advise pet owners to communicate clearly with their doctors before starting any regimen of medical marijuana for pets; this will help ensure that any positive results or adverse reactions are closely monitored. Education about accidental marijuana consumption and THC toxicity in pets will also help reduce the explosion in calls to pet poison control centres. All cannabis products should be stored away from pets to prevent accidental consumption.

Despite a mounting body of anecdotal evidence, there is still relatively little research on the effects and toxicity of cannabinoids, like THC and CBD, on animals. It should be noted there are no reported deaths that can be definitively attributed to THC or other phytocannabinoids without other factoring chemicals also present in the system. The suspected lethal dose of THC in dogs is >9 g/kg, a nearly impossible dose to achieve.

The endocannabinoid system (ECS) has been evolving since the beginning of vertebrate species, but why did veterinary practitioners never learn about it in school?

Veterinary medicine has historically lagged behind human medicine since its inception. Veterinarians and veterinary technicians are cautious creatures that often have not only a human as the owner to deal with but a patient that cannot speak and tell you how treatment is or isn’t working. We also see less uniformity in regulations and practice acts in veterinary medicine compared to our human counterparts.

What veterinary medicine and human medicine do have in common is the lack of education on the topic of cannabis as a legitimate medical therapy in veterinary school. We also see less interest in pharmaceutical companies wanting to invest in clinical studies for companion animals (cats and dogs). Moreover, we see more conservative organized veterinary medicine, like the American Veterinary Medical Association, still holding on to out-dated information and prohibition era beliefs surrounding cannabis, perpetuating false assertions that there is no evidence for safety or efficacy of cannabis products in animals.

The use and demand for cannabis products in veterinary medicine is growing rapidly, mainly by pet owner demand. Unfortunately, it is growing faster than most practitioners have the time to educate themselves about it. As veterinarians and veterinary scientists better understand this fascinating and emerging therapy, they shall be able to better deploy cannabinoid therapies for their animal patients and formulate more effective cannabinoid medications.