HOW DOES CANNABIS WORK?

THE MECHANISMS OF ACTION OF MEDICINAL CANNABIS

It is our goal to contribute to spread the knowledge about the therapeutic properties of medicinal cannabis.

Cannabis has been regarded as a folk medicine in several cultures for millennia. However, even “first world” countries, and countries that are in the G8, such as the UK, or France have practically no regulation in terms of medicinal cannabis. Recently, there have been some advances in certain countries such as Germany, the Netherlands, etc. but much is left to be done.

Information is a basic tool for the empowerment of people. It is important to understand the scientific basis of how cannabis works in our body so that one can optimize the processes of health and healing. This helps people make decisions not just at a personal level but also at a collective level as well.

1. How does cannabis work?

There are many reasons for wanting to understand what science has so far revealed – and what remains unknown – about cannabis’ medical potential.

Can cannabis really help people with AIDS (acquired immune deficiency syndrome), cancer, glaucoma, multiple sclerosis, epilepsy, fibromyalgia, or any of several other conditions it is purported to relieve?.

How can this plant, with its chemical components, operate these specific actions in our body?.

2. The paradigm dogma of pharmacology

Endogenous substances and processes are those that originate from within a system such as an organism tissue or cell.

Exogenous substances and processes are those that originate from outside of the organism, such as pharmaceutical drugs.

The central dogma of pharmacology states that all pharmaceutical drugs or medicinal substances that we introduce in our body (exogenous) act in a similar way, either:

An example of the first group, an agonist, is “insulin”; a diabetic person loses the capacity to produce endogenous insulin, and so takes exogenous insulin to replace endogenous insulin, which is absent. Another example, a person with Parkinson’s disease loses the ability to produce an important neurotransmitter involved in the induction of movement called dopamine, so this person should take substances that generate dopamine in the body (precursors), so as to be able to replace the absence of dopamine.

An example of the second group, antagonists, are “beta-blockers” which are competitors of adrenaline. These are predominantly used to manage abnormal heart rhythms, and to protect the heart from a second heart attack after a first heart attack. Beta-blockers act by blocking the receptor sites for endogenous adrenaline to prevent stroke and cardiovascular events. 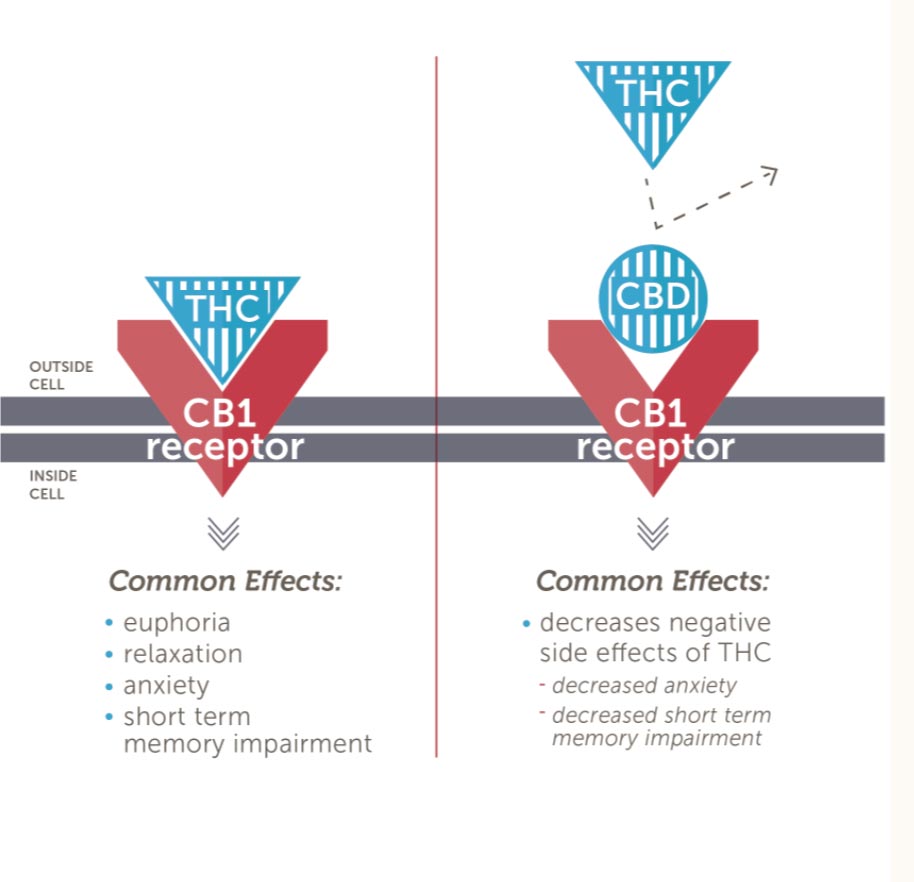 3. Cannabinoids from outside and from inside the human organism

Cannabinoids (Cannabis + oids from greek eîdos, “form, likeness”) are naturally occurring compounds that are like (are structurally related to) tetrahydrocannabinol (THC), a psychoactive compound present in the Cannabis plant.

According to their source, cannabinoids, can be classified as:

The internal receptor system that responds to cannabinoids is called the endocannabinoid receptor system (ECS). It is responsible for modulating a variety of bodily and cognitive processes. The ECS is involved with multiple biological functions, such inflammatory conditions mediated by the immune system and autoimmune diseases, as well as neuroinflammatory and neurodegenerative conditions. Moreover, the ECS participates in the immune control at the central nervous system (CNS), maintaining overall “fine-tuning” of immune response balance, and influencing the reaction to inflammation and infection by the nervous and hormone (endocrine) systems, which often act together (neuroendocrine system).

Cannabinoids, both endo and exogenous, have been found to function as agonists or activators, activating processes through these specific receptors in our cells when endogenous molecules, which should be activating these cells, are not working correctly. Thus, cannabinoids, as other pharmaceutical drugs, mimic the action of endogenous molecules that have a specific mode of action.

The endocannabinoid system has been shown to have a homeostatic role by controlling several metabolic functions, such as energy storage and nutrient transport. Homeostasis is the state of steady internal, physical, and chemical conditions maintained by living systems. It has been implied in immune response, the autonomic nervous system (a control system that acts largely unconsciously and regulates bodily functions such as breathing, heart rate, and certain reflex actions), analgesia, thermoregulation, sleep, and the development of exercise-induced euphoria in humans (a state colloquially referred to as a runner’s high).

There are two types of “cannabinoid receptors”:

6. The active principles of the cannabis plant: a plethora of cannabinoids

Of over 480 different compounds present in the cannabis plant, only around 140 have been identified as cannabinoids, while others are classified as terpenes and terpenoids (see next section). Within the cannabinoid compounds, the most well known of is delta-9-tetrahydrocannabinol (Δ9-THC), which is the main psychoactive ingredient in the plant. Other common cannabinoids include cannabidiol (CBD) and cannabinol (CBN).

The cannabinoids are separated into subclasses that include:

Tetrahydrocarbinol (THC) is the main psychoactive component in the plant. This compound reduces pain perception in the brain and is also neuroprotective. THC has a similar affinity for the CB1 and CB2 receptors. THC is an active ingredient in Nabiximols, used for people with multiple sclerosis (MS) to alleviate neuropathic pain, spasticity and other symptoms.

Cannabidiol (CBD), on the other hand, is not psychoactive and has been found to act as a CB1 receptor antagonist. In 2018, CBD was FDA-approved (trade name Epidiolex) for the treatment epilepsy. It is also used for the treatment of pain, movement disorders, anxiety and cognition.

Cannabichromene (CBC) presents analgesic properties as the result of its ability to block the activity of a certain type of receptors that play a role in our perception of pain. CBC has also been associated with certain anti-inflammatory properties in the gastrointestinal system.

Cannabigerol (CBG)  is also not psychoactive and acts as a CB1 receptor antagonist. 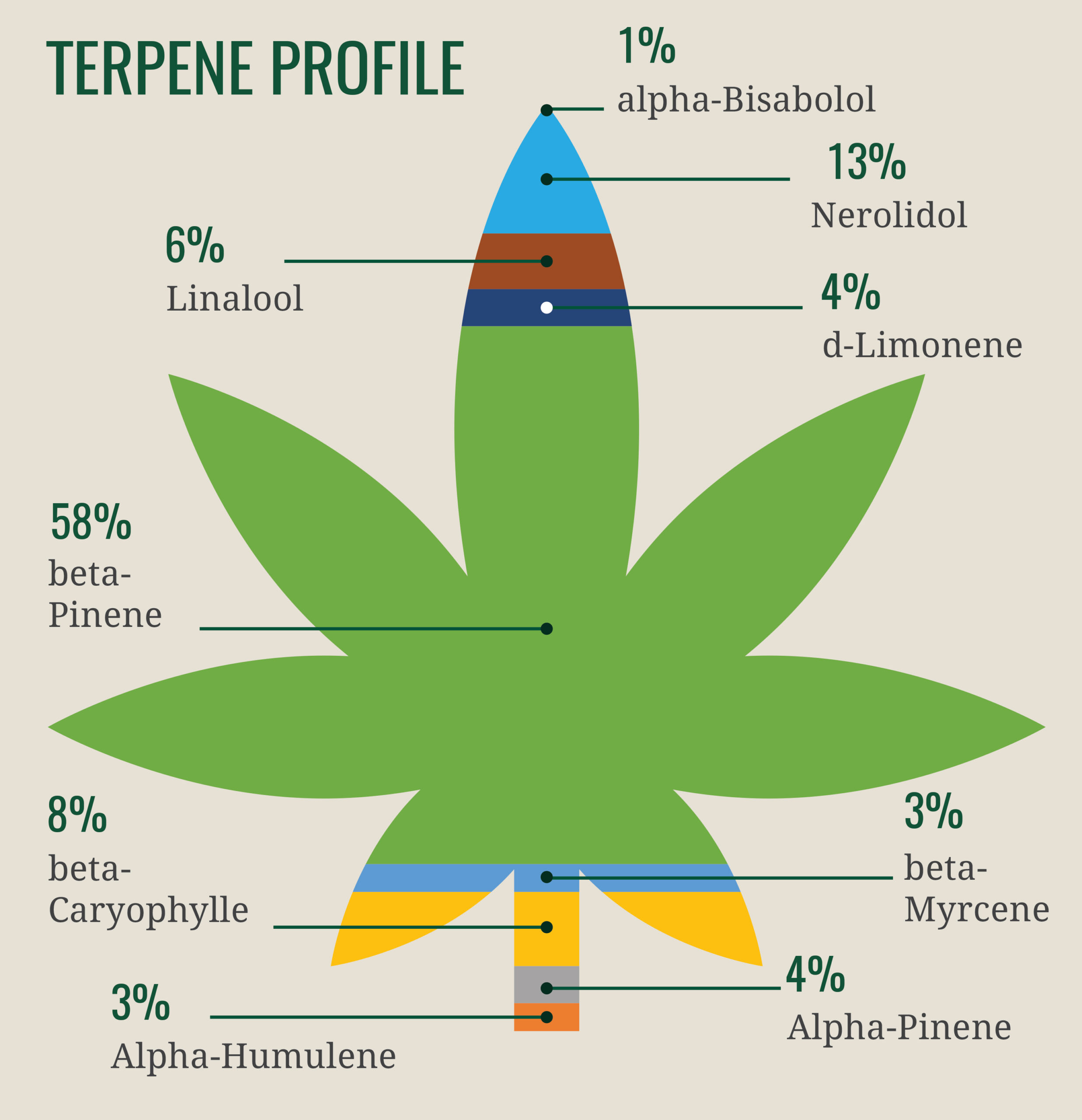 Terpenes are a large and diverse class of organic compounds, produced by a variety of plants. They often have a strong odour and may protect the plants that produce them by deterring herbivores and by attracting predators and parasites of herbivores. Terpenes are hydrocarbons, containing only carbon and hydrogen atoms. Terpenopids are modified terpenes as they contain additional functional groups, usually oxygen-containing.

Terpenes and terpenoids are the primary constituents of the essential oils of many types of plants, and are responsible for aroma and therapeutic properties in herbal remedies. Multiple studies attribute different effects to terpenes such as that of relaxing or neuroprotective. Examples include geraniol (present in lilacs), limonene (present in citrus fruits), myrcene (present in hops), linalool (present in lavender) or pinene (present in pine trees).

In cannabis plants, the biochemical diversity of these components is remarkable, with as many as 200 different terpenes and terpenoids described. Medicinal cannabis strains can vary greatly from one source to another, and even from one harvest to another. Those with relatively high concentrations of specific terpenes do, however, make them easier to identify by their smell than other strains. Most agree that varieties that smell of musk or of clove deliver sedative, relaxing effects (high level of the terpene myrcene); piney smells help promote mental alertness and memory retention (high level of the terpene pinene); and lemony aromas are favored for general uplift in mood and attitude (high level of limonene). You may also find strains dominated by carophyllene, terpinolene and – in rare instances – pinene.

Recent research has shown that the terpene caryophyllene, was discovered to be one of the first non-cannabinoids to directly activate cannabinoid receptors, and therefore may have specific medicinal effects due to its effect on our endo cannabinoid system.

The cannabis plant is the best-known genus of I1 genera of plants of the cannabis family. Cannabis consists of 3 primary species that differ in plant morphology, ratio and quantity of substances: Cannabis sativa, Cannabis indica, and Cannabis ruderalis.

Cannabis sativa is the most common cannabis species used in the world today, it originates from the equator region of Colombia, Mexico, Thailand and Southeast Asia. Sativa varieties are generally more mentally stimulating, energetic and euphoric. They tend to help more with nausea and other abdominal complaints, appetite stimulation, headaches, depression and fatigue. Although side effects are uncommon and usually mild, sativa strains are more likely to cause or worsen anxiety and paranoia.

Cannabis indica species are the second most common in the world. These varieties grow lower and broader than sativa and have relatively wide and short leaflets. Indica originates from the Middle East, Afghanistan and Pakistan. Indica cannabis strains contain high levels of myrcene (a terpene) with typically relaxing and sedating effects. They tend to help more with pain, anxiety, muscle spasms, and insomnia.

Cannabis Ruderalis is a relatively rare strain originating from Russia. It grows relatively consistently and is less affected by light-darkness ratios. It produces flowers only at its tips and has minimal percentages of the psychoactive substance THC.

Cannabis and Cannabis Extracts: Greater Than the Sum of Their Parts?

There is a plethora of cannabinoids that the cannabis plant may contain and different combinations, permutations, and concentrations of these cannabinoids play a significant role in the therapeutic effects.

Using the whole plant of Cannabis for medicinal purposes has unique pharmacological benefits. When discussing medical cannabis, studying the different phytocannabinoids (e.g. THC, CBD, THC-V, CBG, CBN, etc…) in isolation does not help us fully elucidate or even understand the mechanisms by which cannabis exerts it’s physiologically and psychologically therapeutic effects.

The real story is much more sophisticated and complex, involving a synergy not only between the aforementioned phytocannabinoids, but also their interactions with the different terpenoid profiles characterizing each cannabis plant. It is this diverse and unique combination of terpenes and phytocannabinoids and their synergistic potential that give cannabis its versatility and wide-ranging therapeutic benefits (Russo, 2011).

Essentially, consuming whole-plant cannabis unlocks a much more diverse symphony of cannabinoids (active chemical compounds in cannabis) and terpenes (aforementioned aromatic hydrocarbons that give cannabis its unique smell) that also bind to receptors in the brain, consequently complementing and synergizing with the cannabinoid profile of that plant to provide more nuanced physiological and psychoactive effects. This pharmacological synergy among approximately 140 distinct cannabinoids and ~400 terpenes, the relative levels of which largely determine their therapeutic effect, is called the “entourage effect” and is exactly what makes cannabis such a unique medicinal product (Fanelli et al., 2017). This sort of harmonious synergy among the hundreds of active constituents in the cannabis plant obviously cannot be emulated in pharmaceutical drugs, which rely on a “single molecule” mechanism.

10. Why block a valuable medicine?

While whole plant medicine like cannabis is considered “living medicine”, the downside here is that our extremely rigorous system for testing and approving drugs makes testing something like cannabis extremely difficult if not impossible under the current structure. For those who have seen “The Price is Right”, a pharmaceutical drug can be represented by dropping one single ball (the drug) in the game Plinko and observing how it hits each one of the pegs and (hopefully) falls into the right hole (receptor in the brain/body). In the context of cannabis, this would be like dropping a hundred different coloured balls and trying to study them all at once.

It becomes almost impossible to control for confounding factors and identify which combination and permutation of cannabinoids/terpenes causes what effects. However, this lack of proper testing protocols and mechanisms to be able to adequately experiment and approve whole plant cannabis as a medical treatment should push us further to develop better testing methods instead of throwing the baby out with the bathwater and disregarding cannabis treatment entirely. There is much to be learned still about the mysterious effects of cannabis on the human body and, as with most things in science, the more we find out the more questions and complexities we unravel.